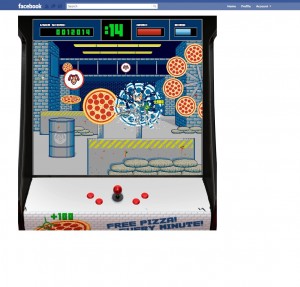 I love pizza! And when I order,  8 times out of 10,  I  choose Domino’s. They have a great variety of food  and great prices. And they deliver FAST!!! Do you remember  the NOID? The NOID was a Domino’s character created in the 80′s that would do anything to ruin  pizza. It had video games too where you had to avoid the NOID from destroying your pizza to win. And there was a HILARIOUS Family Guy episode featuring him getting his butt whooped by Mayor West.

It’s the NOID’S 25th birthday, and Domino’s has brought it back. The NOID is celebrating his birthday by stealing 10,080 free pizza gift cards and giving away one each minute to the highest score in each round of his new Facebook game.  The game runs only until August 15 at 10 a.m. To play this game “Like” Domino’s on Facebook and shoot everything except the NOID. The person with the highest score wins! Basically, he’s pitting our Facebook fans against each other in a massively social arcade game, with the prize being a free pizza in the form of a $10 gift card.

One lucky reader will win a $20 Domino’s Pizza Gift Card!

Mandatory Entry(You Must do this to be entered):

Tell me your favorite pizza toppings.

Extra Entries: (These are optional. Make sure to leave a separate comment for each entry)

Rules: Open only to US. Ends August 29, 2011 at 11:59 EST. Winner Will be picked by ramdom.org. I will email the winner after the giveaway. They will have 48 hours from the time I emailed them to get back to me. If they don’t I will pick a new winner.  If your comment ends up getting spammed, don’t worry I will un-spam it.

Disclosure: Domino’s sent me $20 in gift cards to do a give away. I will be receiving a gift card too.